It’s fair to say that we’ve always had concerns about Rosie’s mouth and general oral functions. You may have seen that her mouth is always open – it’s not that obvious, you’ve probably not noticed!

When Rosie was born the doctors noticed a slight droop on the right hand side of her mouth. It was suspected that she may have experienced some sort of nerve damage during the birth and that this would correct itself over time.

Fast-forward a few months later and of course we realised that this wasn’t nerve damage but an early sign of how Rosie’s condition would affect her beautiful little face. Worryingly, it’s only when we look back at photos of months gone by that we see how fast this droopiness in her face, lips and jaw is really progressing – is there any stopping it? I can’t help but feel I’m not doing enough about it.

The other concern is that whilst we can see how the condition is effecting Rosie on the outside, understanding what’s going on on the inside is quite a different matter. Take her mouth for example, we know that she struggles to smile and pronounce letters that require some sort of lip closure like B’s, F’s M’s, P’s, V’s and W’s but there’s also a lot of other weird stuff going on inside her mouth too.

As a result, in our last meeting with the neuromuscular consultant at the end of 2016 we asked if we could be referred to a paediatric dentist to discuss our concerns – our appointment finally came round last week.

We arrived in Bristol and parked at the infamous Trenchard Street car park a short walk away from the children’s hospital. It feels like we’ve parked our car here more than our own drive over the last three years, and I dread to think about the money we’ve spent doing so – I know we’re in quadruple figures! This time, parking was slightly different because for the first time we were able to take advantage of our new blue badge!

We’ve only had the blue badge for a couple of weeks and already it’s incredible! Iain and I can’t believe the difference it makes. It may be a little thing, but it’s actually a sanity-saving, anger-preventing, helpful little badge that allows us to park in disabled parking spaces making every day outings with Rosie that little less stressful. No longer do we have to worry about finding a space big enough to get Rosie in and out of the car and us twisting our backs (again!) trying to do so or parking miles away when we’ve got lots of heavy equipment to deal with. It is a little badge of blessings and we are incredibly grateful for it. 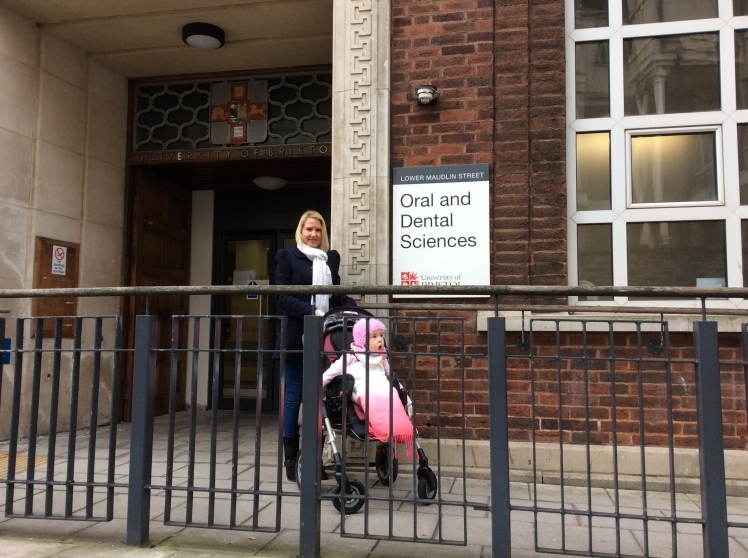 We arrived at the dental hospital and were directed to the first floor. The waiting room was packed which is always a worry – A) because sitting Rosie on our laps or leaving her in the pushchair for long spells doesn’t offer the support she needs and after a while she tires and slumps like a rag doll, and B) the slightest cough, sniffle or sneeze makes you want to run for the hills as this could mean weeks of illness for Rosie and even hospitalisation. Crowded confined spaces with Rosie – no thank you!

We were lucky that our appointment was first thing in the morning so after a few teachings from Iain about what to do when the dentist asks to look in your mouth (you can always rely on dads for silly but ingenious ways to make going to the dentist a game!) and a quick game of guess the sticker, we were called in.

Iain and I proceeded to discuss our concerns:

Rosie’s teeth don’t actually close together as she has enlarged gums at the back of her mouth which are preventing her teeth to meet at the front. I think this is called a posterior open bite. At best when you try and bring her bottom jaw up by hand she has about an inch gap between her teeth. I am convinced that a lack of wear and tear on the back gums from eating and chewing has made this worse. Plus the use of a dummy probably hasn’t helped matters either.

The roof of Rosie’s mouth is so high and narrow that it’s almost impossible to see it properly. She is unable to reach the top of her mouth with her tongue and thick mucus accumulates deep in those hidden, awkward and high places.

She also has very deep ridges on her palate and we’re not sure if that is anything to worry about. We use a little cotton ear bud every couple of days to carefully stroke the roof of her mouth to remove any hardcore build-ups which appears to work.

We brush Rosie’s teeth morning and night with a standard child’s minty toothpaste but find that the foam is a bit of an issue for her. So as soon as we’re done brushing we quickly use our suction machine to suck out as much as we can out.

Rosie has a weak cough and swallow, which is a pretty dangerous combination. This means that thick saliva can gather at the back of her throat and cause her to choke as she’s unable to clear it herself.

Rosie loves to ‘brush’ her teeth and can hold a toothbrush but is unable to complete the task effectively. It’s more of a light tap of the bristles against her teeth, but she gets satisfaction from it and we encourage it.

Many children who are fed via a gastrostomy can become food adverse and fear anything going into their mouth which can present a huge battle for things like visits to the dentist! So we are doing our best to keep Rosie interested in food by having ‘end of fork’ tastes, the odd sip of mummy’s wine (squash!) out of a crystal sherry glass, role playing with food and drink and regularly visiting our local dentist as a family so she can see Iain and I having the same thing done to us.

There are other things that are an issue too like her constant dribbling. There are hyoscine patches available that can help dry the mouth out, but I’ve always resisted using these on Rosie as I am not a fan of using chemicals or drugs and messing with the balance of nature except in exceptional circumstances – and dribbling (right now) doesn’t seem that much of a serious issue in the grand scheme of things.

Most children have a full set of 20 milk teeth by the age of three and according to one website ‘can give you a brilliant grin’ – well Rosie is sporting 14 teeth so far and she’s three in three weeks! I think we know Rosie certainly isn’t ‘most children‘!

Anyway, the upshot of our dental appointment was that:

We just want to be sure that we’re doing all we can now to prevent or reduce horrible things in the future. In the USA we hear of plates being used in children with Nemaline Myopathy to help widen the mouth (high arch palates are quite common I think with this condition), I mentioned this in our meeting along with some sort of chin strap or chin rest to help reduce the stress on her jaw – I felt ridiculous saying it but this is such a new world for Iain and I and we have no idea what’s available or what to do to help her – we’ll have to wait and see what the next appointment holds!