Rosie had a temperature, wasn’t sleeping or keeping her feeds down. We’d seen it all before. We knew the drill. ‘Let’s not panic’, my husband Iain and I had said to each other. ‘She’ll have only just picked up a little bug from a baby play group.’ We gave her loads of love, tried to keep her hydrated, temperature down and gave her some Calpol.

Not even 24 hours later, a frantic Iain was cradling the grey-blue, limp body of our beautiful Rosie in his arms through the doors of the A&E department at the Bristol Children’s Hospital. Seconds later, about 20 doctors and nurses were crowded round the bed where Rosie lay, pumping her chest and wiring her little body up to monitors. She’d gone into respiratory arrest.

Before this time, we’d read that 66% of children with Nemaline Rod Myopathy die before the age of two. We could never see with Rosie how this was ever a possibility – until that day. She’d picked up two very nasty bugs – Human metapneumovirus and RSV Bronchiolitis. We couldn’t believe she was going to join this statistic.

She battled every day in the intensive care unit for over a month. During that time we celebrated her first birthday, Iain and I hugged each other more times than in all the years we’d known each other, we met new friends and saw many old ones, and on the darkest day all the family traveled cross-country to rush to her bedside to say their goodbyes when it looked like Rosie wasn’t going to see another day. 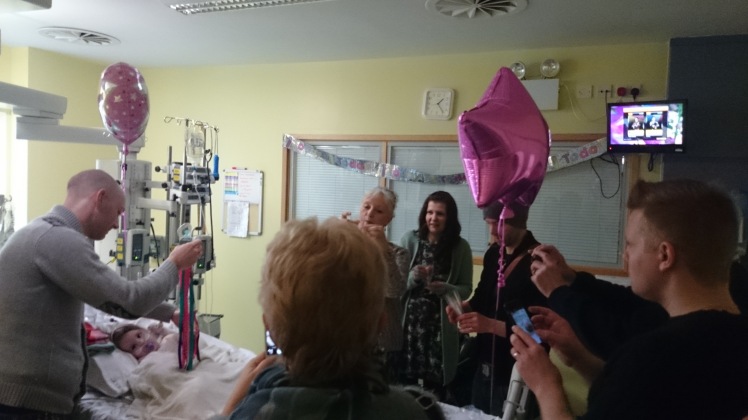 I look back and can’t believe I clutched the hands of my precious daughter and, cuddling her into me so tight, told her there were no words to explain just how much I loved her and by everyone who knew her. With tears in my eyes and a lump in my throat, I explained that our life would never be the same again without her and we’d love, remember and honour her always, but that in no way would we ever be angry and would accept her decision if she decided that this was her time to say goodbye.

It doesn’t feel real writing about it now and I can barely remember these early days in hospital. I seem to have discovered a secret pocket in my brain where all the horrendous experiences can be locked away, never to remembered again. So much happened in such a short amount of time and Iain and I were given so much information that we walked around in a daze, trying to get our heads around what everything meant and the possibility of a life without Rosie.

Putting Rosie on a ventilator was a hard and emotional decision. It was the 16th March, the day after her 1st birthday. She’d been fighting for days to breathe, despite the oxygen support, physio, suction of her secretions, drugs, love and cuddles. She was so tired and the doctors were concerned how long she could battle on.

There was a huge risk of putting Rosie on the ventilator due to her muscle weakness. Having a machine essentially breathe for her would mean her muscles would become even weaker – and she may never be able to come off it. Carrying on with the oxygen support alone didn’t seem like an option anymore and it was clear that she needed something more, and neither of us could live with ourselves if we’d not done all we could with the options we had and she died.

It was worth taking the risk. 27 days later and Rosie turned a corner. She was on the ventilator for just under 2 weeks, she’d gone through a grueling regime to get her back to good health, but throughout this entire time the support, help, laughs, love and kindness we experienced by all of the doctors and nurses at the Bristol Children’s Hospital – and of course all of our family and friends, had been absolutely amazing. We were so incredibly grateful to have been looked after and supported so well.

It certainly wasn’t easy for Rosie to come off the ventilator and a couple of days later her left lung completely collapsed, so intense physio was in order to try and re-inflate it. But over the days she gradually got a little better and after our many weeks in hospital we were finally able to bring Rosie home.

This was truly our wake-up call to how serious Rosie’s condition is. There are so few children around the world with this condition that we have very little idea about what is in store for us – we can only presume based on the information we do know.

Nemaline Myopathy clearly has a plan all of its own for Rosie and we just need to try and stay vigilant and one step ahead.

We were given a second chance and my how I will always be eternally grateful for it.